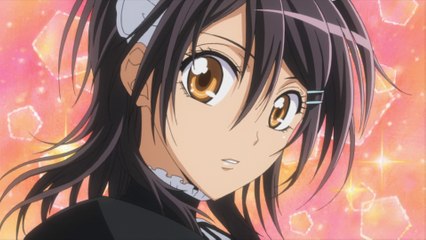 Bonjour, my petit dejeuneres! As you may have guessed I can’t speak French, but what I can do is give you a pop at winning the “ridiculously cinematic, action-packed” Ghost in the Shell: Stand Alone Complex – Solid State Society Blu-Ray. Now, don’t tell anyone, but I was gonna shut it down on the 27th, so get any entries to me by midnight tonight and we’ll keep it on the down low.

You can probably tell that I’m feeling saucy, so we’re also going to do the Annex a bit different this month and see what happens. Did you check out Baka and Test or Clannad yet? Great right? Well there’s some great stuff this month too. Firstly, let’s talk about Bleach. Now I was very dismissive over the last episodic batch of Bleach I saw, but I recently watched the first three Bleach movies on Blu-Ray. They all came out on the 28th of May but I didn’t get ‘em in time to include them in last month’s Annex, sorry about that. The first one, Memories of Nobody, is the best and as well as being exciting and touching – also may have helped me put my finger on how I do like my Bleach.

I got won over by Memories of Nobody from the start: Soul Reapers Ichigo and Rukia get into a big barney with a massive, monstrous Hollow. With swords and a soft rock they kick it’s ass and then hear about something strange afoot at the train station. There they get mobbed by a swarm of ghost-looking things with big pink cones on. Senna, a strange and spoilt girl appears and sucks all the ghosts up and away in a tornado she conjures with her zanpakuto. Rukia goes back to the Soul Society while Ichi gets left behind to babysit Senna. He pretty much ditches her straight away in favour of trying to find out what the ghost things were and where they’ve come from. It turns out that a new dimension has sprung up between our world and the Soul Society and the ghosts are “Blanks” that are leaking through.

We remain mostly earth bound and spend a lot of time with Ichi trying to get to the bottom of the mysterious Senna. The groundedness of Memories of Nobody is probably why I liked it so much. When Bleach spends all its time in the Soul Society I kind of tune out and I think that’s because of two things. Firstly, it makes it harder to identify with what’s happening when it’s not going on in the real world. Secondly, when stuff is going down in the non-real world you don’t worry for characters as much, as the fantastical/magical setting comes with an in-built feeling that there’ll always be some spell or special move that’ll save the day. And as original as the land of the Soul Society may have once been, this kind of setting is commonplace now and spending all our runtime there can strand you in a generic setting, leading to the complacency that comes with over familiarity. That was three things.

We do end up in an otherworldly backdrop for the finale where Ichi must battle The Clan of Darkness (a bunch of baddies in armoured bras) to save Senna, but because we’ve put the legwork in in our reality it packs a lot of punch and Memories of Nobody is both bruising, but also heartfelt and sweet as a result. This one gets a big “yes” from me. Bleach Movies 2 and 3 do not.

Bleach Movie 2, The Diamond Dust Rebellion, is boring. I never felt emotionally invested, mostly because the focus is on Lieutenant Matsumoto and Captain Hitsuguya. They’re perfectly serviceable characters… actually, no. Shut up, they’re not. Matsumoto is just the contractually obligatory character with the breasts large enough to exert their own gravitational pull and Hitsuguya is still a jerk, no matter how much sympathetic backstory you try and retroactively foist on him. A powerful artefact called The Oin is being moved so it obviously ends up getting nicked. In the wake of the battle and theft Hitsuguya gets the blame and goes on the run to clear his name. It’s a rather dull affair that’s narratively not done enough with to be able to support a feature length duration, with main characters who you could take or leave, but would probably happily leave. Two sisters flit around the edges with red and blue miniskirts, a flaming sword and an electro whip; but there’s not much more fun than that to be gleaned.

I watched the three of these in a row, so it was with a resigned sigh that I slipped the Blu for Movie 3, Fade to Black into my player. However, it turned out to be far better than Diamond Dust, just not as much of an actual “film” as Memories of Nobody. Mayuri, who looks like Venger from Dungeons & Dragons’ bleached skeleton on prozac, uses an enormous pipe organ to create some poisonous stuff, he then takes a slice to the neck from an unseen assailant, forgets who he is and unleashes his creation, which is now in the form of white sludge, all over the city. Like a flood of toxic melted marshmallow, the sludge floods the town petrifying anyone unfortunate enough to be in its path and also conjuring up a ginormous screaming baby with a beard of swords.

Meanwhile Rukia finds herself erased from existence and stuck in a hut with an overly familiar brother and sister who totally have an ulterior motive in keeping Rukia on lock down. Ichigo and Kon (the cuddly toy lion that controls Ichigo’s human body for him when he pops out of it to do his soul reaping) are the only ones who still remember who Rukia is, but unfortunately and annoyingly for them no-one else remembers who THEY are either! Harsh. It’s a bit of a slog, but the harks back to Ichi and Rukia’s first meeting are touching and it’s good to get a nice, big dose of Kon. All three Bleach movie Blu’s are devoid of any bonus materials and the picture isn’t perfect – there’s colour banding evident in all of ‘em.

It’s another feature next – Roujin Z. From the director of Blood: The Last Vampire and the writer of Akira, this one is something special. The Ministry of Welfare of the future are more like a band of panto villains than a government department. Hoping to put a stop to Japan becoming “a nation of wrinklies” they invent the Z-001. A machine to keep the elderly out of sight, quiet and no longer a burden on care workers. It’s a big, atomic reactor powered, mecha-bed that takes care of bathing, ones and twos, feeding, dressing and exercise. Once test subject Mr. Takazawa gets wired in though the Z-001 becomes a geriatric Transformer: escaping and going on a destructive rampage to the beach. Takazawa’s former carer Haruko, along with her friends and an elderly hacker must unite to try and make sure robo-Takazawa doesn’t do too much damage or get destroyed by the Ministry of Welfare baddies who are hot on his wrinkly tail.

Roujin Z is a wonderfully animated, sharply observed, exciting and emotional film; focussing on issues of dignity, the disdain for the care of the elderly and even throwing in a big, robotic punch up. The relationship between Haruko and Takazawa is sweet, but not cloying or creepy and one of the baddies gets a cracker of an arc. Roujin Z is like if you put an old man who just wanted to go to the beach in Robocop: Part old man. Part life-support machine. All pop.

Talking of Robocop, next up is Spice and Wolf, which has absolutely nothing to do with Paul Verhoeven’s hyper-violent masterpiece. Set in a sort of middle ages fantasy world Spice and Wolf is a series about the adventures of Lawrence and Holo. Lawrence is a travelling merchant who one harvest time returns to his cart to find that it now contains a naked lady with the ears and tail of wolf. She is Holo – the spirit of a good harvest in (almost) human form.

The pair slowly realise how good they are for each other and embark on a series of adventures that are, unusually, not magic or fighting based, but all about the art of trading. Buying, selling, currency exchange, assets, investments, manipulating market value – it’s all here and it’s all a lot more fun than it was in Business Studies. I’m really digging this current trend toward inserting getting your GCSE’s into anime and especially liking how it does feel like forced edutainment, but an interesting, yet informative twist.