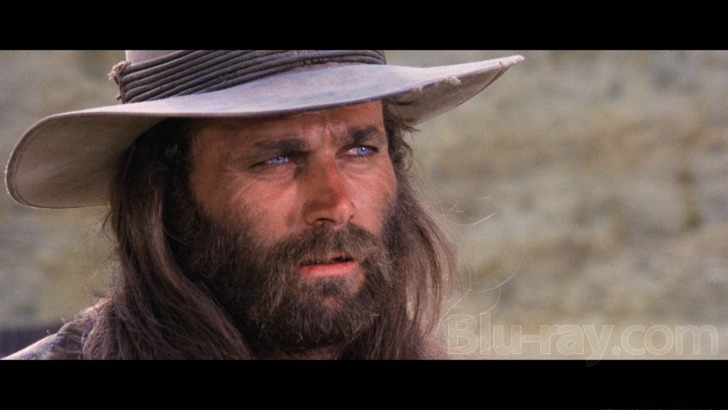 Enzo G. Castellari’s 1976 spaghetti western, Keoma, is a divisive film among cult cinema enthusiasts. For those who enjoy its unique approach, some kind of masterpiece emerges; bolstered by an excellent performance from Franco Nero as the hero, whose fight against his own brothers and a local landowner, ends in tragedy.

“A man born free can never die!” is the slogan-like rally call at the film’s close. Indeed, it is the mythic essence of the American spirit which Keoma bravely fights for at a strong personal cost. Of course Italian westerns were long viewed as inauthentic product mimicking American cinema (and poorly, say the critics at the time) and yet such writers as Sir Christopher Frayling saw much more too these occasionally wonderful movies. His book, Spaghetti Westerns: Cowboys and Europeans From Karl May to Sergio Leone(1981), is an absolute must-read for those interested in the spaghetti’s historical development and textual analysis. As Frayling rightly noted:

“Spaghetti westerns changed the face of the most venerable and characteristic genre of American cinema. They represented an extraordinary and potent cross-fertilization of American and European cultures.”

The sentiment in Keoma is that fighting for freedom against tyranny and to live without fear are just causes. This not the standard type, certainly the cynical Leone variation, where possession of money and gold is a key instigator for events. Neither is it a straight forward revenge saga. Keoma is a film about a haunted hero striving to do good deeds by ridding the world of bad men.

Another interesting spin presented in Keoma is that of racial harmony between several ‘good’ characters. Keoma is a mixed race former soldier with a white father and native American mother. His half-brothers tease him and only the father instils in him a sense of worth and courage. Their bond is beautifully played by Nero and actor William Berger and provides this film with real heart. Castellari clearly evokes the American Constitution’s notion that all men are created equal. Keoma is also great friends with Woody Strode’s George, a black ranch hand who helps the gunslinger out when trouble looms. The multicultural aspects of this western are definitely idealistic but also wholly positive.

Historically, it is perhaps suspect based on the evidence, but films can present (then) cultural changes and attitudes as part of the revision. Kevin Costner won Oscars for Dances with Wolves (1990). William Shannon, Keoma’s father, is a forward-thinking sort who recognises the superficiality of racism and seemingly rejects notions of racial inferiority. The colour of one’s skin is nothing more than that. Keoma has an anti-racism message at its core which might surprise in its effectiveness.

Keoma, historically, sits in a period of great changes in Italian cinema and the western genre. In Italy, these later movies were known as ‘crepuscolo’ westerns, which focused on a gloomier atmosphere and tended to be more violent than the norm (which is saying something for Italian cinema). Before this – after the Leone and Corbucci imitators ran their course – spaghetti westerns got a bit strange with Eastern elements such as kung fu making their way into movies. But what to expect when literally thousands of these pictures were made over the course of a decade and a half?

Of course Keoma seeks an idealistic view, and history shows the European-expansionist method of enslaving and removing non-whites didn’t leave much room for making friends. However, multiculturalist aspects were creeping into westerns by the late 1960s and into the 1970s, where revisionist westerns began to deconstruct the self-aggrandizing myths and asked questions about the nation’s history. Some pictures even found time to equate past wrong with current conflicts such as the Vietnam War. The spaghetti westerns were seen as inauthentic products but they too helped and influenced US westerns hugely – and not just in terms of aesthetics.

Keoma’s main narrative thread sees a war veteran returning to his hometown of Skidoo City and finding it in conflict and disarray. Keoma’s half-brothers are in cahoots with Caldwell (Donald O’Brien), a landowner, and they have a grip on the town that disturbs the returning soldier. Realising the town cannot live this way, Keoma sets about disrupting things and teams up with George (Strode) and his father to free the place.

One of the most striking visual elements of the film resides in the moody atmosphere (as noted previous) aided by stark landscapes and decrepit sets shot by Aiace Parolin. Castellari shot his movie on ruinous sets at Elios Studios and locations such as Campo Imperatore, up in the mountains close to L’Aquila. It almost seems fitting a symbol for the state of the western itself. A plague has gripped the town, too, forcing locals to be suspicious of strangers. Keoma is their saviour.

Keoma was written on the hoof after a script, based on an initial treatment by actor and writer Luigi Montefiore, was rejected as “Bullshit,” by Castellari and Nero. The Italian director told me this himself when I met him for an interview in May 2012. The origin of the film was actually envisaged as a sequel to Nero’s breakout movie Django before turning into something else. It is quite a revelation because Keoma seems a very tightly scripted and inventive picture of strong elements (such as Shakespearean tragedy). Castellari informed me that in fact a lot of the scenes were made up on the day of shooting or in re-writes done the previous night. It’s not the way to make a movie, he said, but nothing else could be done given the time frame.

In Keoma, a witch (Gabrielle Giacobbe) appears at intervals to either guide or warn the gunslinger. She is spectral and yet seemingly very much corporeal and of this earth, as Keoma leaves her in charge of a newborn baby at the film’s climax. There is something supernatural in the way she just turns up, but again, this gives Keoma a frisson of oddity and provides that Shakspearean-tragic flourish of a man having to fight his brothers and avenge a slain father.

Castellari’s techniques are at times positively avant-garde. The editing is excellent (by Castellari’s regular cutter Gianfranco Amicucci) and sometimes the director blurs time and space into one continuous shot so that past and present create a seamless line. One scene features Keoma and Shannon talking yet their lips do not move. This is not poor dubbing work at all. The conversation we are privy is taking place after events currently depicted – Keoma and his father are practising their aim by shooting at a swirling target. The scene cuts to them sitting on a porch and we’ve caught up in the current timeline.

Castellari has been dubbed the ‘Italian Sam Peckinpah’ due to his fondness for violent pictures and use of slow motion, as seen famously in the American director’s The Wild Bunch (1968; another elegiac western. Castellari loves to employ slow-motion as bodies fall after being pumped full of lead. As film historian Howard Hughes in Cinema Italiano(2010) jokes: “There are more pirouettes in Keoma than Swan Lake.”

The director uses slowmo for countless shots and the best example occurs when a gang charge with their horses (and fall down). The reaction shot (focusing on Keoma) is filmed in the standard twenty-four frames per second. Then a reverse shot will play the same (slowmo) and once more back to twenty-four frames. It borders on the surreal.

One of many accusations levelled at the spaghetti western is the style over substance argument. Yet Keoma, in its own way, demonstrates a perfect harmony of both. Where the film comes in for lots of criticism – even from those who like the film – is the music by the DeAngelis brothers and songs by Sybil and Guy.

At Cine-Excess V, in 2011, guest of honour Franco Nero spoke about Keoma, in very warm terms, and he did laugh at the reputation the songs by Sybil and Guy have. He initially wanted a Leonard Cohen-style music accompaniment and an early rough cut did use the singer’s music to gage what effect such a tone would have on the film. The songs narrate the action and some find this most off-putting, especially, since the duo’s hearty OTT style and very strange croaky vocals is defiantly unique. Yet the music does not cause too much of a hinderance, and can be taken as adding another layer of peculiarity to the film.

Nero is superb as the lead and throughout the 1970s, he worked with Castellari on a handful of iconic pictures such as The Marseilles Connection (UK title), which kickstarted the whole poliziotteschi subgenre, largely inspired by such films as Dirty Harry (1971) and The French Connection (1971). Once again, the Italians brought their own sensibilities to American genre pictures. Castellari and Nero have remained friends for well over forty years and so high does the director hold his sometime leading man in esteem he once stated:

“I think that to have an actor like Franco Nero is one of the best things that can happen to a director … if it had been possible, I would have made all my films with him.”

Nero is highly effective as Keoma and is a world away from the Django character, an iconic of cult cinema if ever there was one – with his Gatling gun hidden in a wooden coffin. Keoma is a man of inherent goodness and in one none-too-subtle scene, gets strung up and strikes a Jesus Christ pose. The scene in which Shannon is killed in front of his dear son is beautifully staged by Castellari wringing it for every drop of emotion before the devastating pay-off. Keoma would ensure the spaghetti western’s last breath was gracefully drawn.